Call of Duty: WWII - The War Machine Supplements for PS 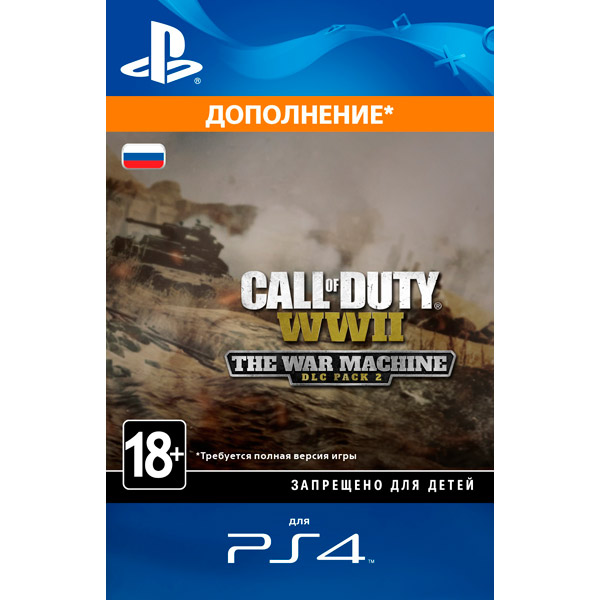 Aleksandr000123 information about the seller and his items
offlineAsk a question

The code will come immediately after the purchase, automatically displayed in the browser window and will come to your email

About the product
In Activision´s Call of Duty WWII, the company finally managed to do what the series fans were waiting for: to revive the genre as a single first-person shooter in the setting of the Second World War. The game was able to add a truly original and catchy storyline, which tells no longer about a historical event, but about the fate of ordinary people in tragic circumstances.

Narrative
The passage is built in the form of visualization of the diary entries of the characters. The mission is preceded by briefings, and the final ones are penetrating monologues and cut scenes, some of which show tears in their eyes.

Gameplay
Game mechanics refers to the first games of the series, adjusted for the capabilities of the modern engine. Interface elements will be familiar to oldfags and clear to neophytes. Shooting and behavior techniques do not pretend to be realistic, but they also do not strain with excessive casualness. And yes! Forget about restoring health: our first-aid kits are everything!

ADDITION
The War Machine is the second large-scale DLC for CoD WWII. It includes:
- Battle of Dunkirk;
- The battle on the ruins of Egyptian Giza;
- secret operation in the rocket complex V-2;
- A new mission for the regime "War" - "Huskies";
- The next chapter of the zombie fashion.

INSTRUCTIONS FOR REPAYMENT
1. Create a Sony Entertainment Network account at ru.playstation.com/registration.
2. Login to PlayStation®Store or our online store.
3. Select the “Redeem Codes” item (on PS Vita, first you need to click on the “Settings” icon
at the bottom of the screen).
4. Enter the 12 digits of the promotional code and click Continue.
5. Then follow the instructions on the screen to redeem your promotional code.

Related to item "Call of Duty: WWII - The War Machine Supplements for PS":

PLAYSTATION PLUS (PSN PLUS) RU 365 days